LAS is an award-winning provider of elearning consultancy, design, development and training services in the UK and internationally. Our mission is to help organisations realise the full benefits of contemporary learning technologies using the most cost effective and appropriate methods for their business needs.

Rob is a designer through and through who is fascinated by how we learn, what we remember and why we pay attention to certain things. He is a huge enthusiast of all that technology can offer to enhance learning and has completed a huge variety of projects in his 14 year career.

He is the editor and co-author of The Really Useful eLearning Instruction Manual published by Wiley and featuring contributions from the brightest and best elearning minds on both sides of the Atlantic..

I took a trip down to London recently for AR VR (Augmented Reality Virtual Reality) World. It was a small affair with geeks rather than sales people manning most of the stands. They were more interested in sharing their enthusiasm for their products, many of which were at prototype stage, than making a sale.

There were booths you could sit in where the temperature, smell, sound, wind and vibrations were all manipulated in-sync with the VR you were immersed in, giving a truly immersive multi-sensory experience www.sensiks.com. I can see great applications for this in building empathy in others. Imagine experiencing the sights, sounds, smells and heat of a shanty-town or refugee camp.

There were a few exhibitors that combined physical objects with VR.  I walked round what looked in reality like a rubbish maze – however, when combined with VR this was transformed: I was, instead, exploring underground caves, inching along precipices above molten lava (is there any other kind?) and fighting off giant spiders www.aisolve.com The latter of these genuinely got my adrenalin going – intellectually I knew I was in Olympia, but my senses told me that with one wrong step I would plummet to my death or the giant spiders would scuttle up my trouser leg if I didn’t torch them.

There were some interesting developments in haptic feedback – essentially ways to make it feel like you are touching a physical object in virtual reality. There were prototypes of little blocks you strapped to the ends of your fingers www.gotouchvr.com. They would apply gentle pressure to your fingertips when you touched an object in the VR sim. They were surprisingly effective. There was also a dentistry training sim where you could practice giving an injection to a patient. You could feel the syringe against the patient’s teeth and the resistance in pushing the needle into the gum, or pushing too far and hitting bone.

My personal favourite was the VR equivalent of a hamster ball – a way you could ‘walk’ and move in a sim. It looked pretty funny but would mean you’d get some exercise at the same time.

It turns out that you don’t need to do much to fool the brain into thinking you are somewhere you are not. I also like the immersion aspect of VR – it blocks out distractions and helps people to focus.

What applications do I see for this technology for learning in development? Some; but it’s still expensive, so it’s typically only used where other forms of training are more costly / dangerous / substantially less effective – or it’s a vanity project. It is still a young industry with the players finding their way. It’s virtually there – but not quite. 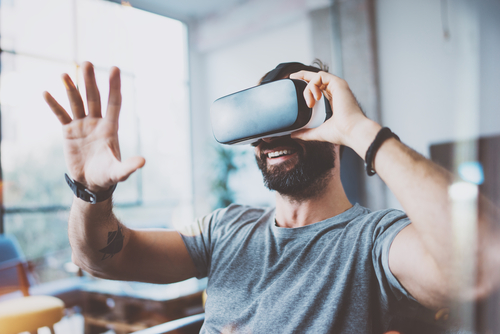